Join architectural historian Christine Madrid French on Thursday 8/20 at 5:30 pm Pacific to discuss Alfred Hitchcock and his movie architecture during this FREE happy hour webinar. Join us via Zoom (limited to 500 people) or watch on Facebook Live. This program will also be recorded. Sign up here for zoom link. 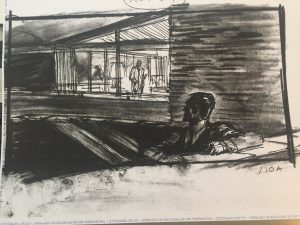 How did Hitchcock create the iconic American Haunted House and the first Modernist Villain’s Lair? Explore the backstory of the real buildings that inspired his work in Psycho, Vertigo, North by Northwest, Rear Window, Rope, and The Birds. And why are Edgar Allan Poe and Frank Lloyd Wright in this story? Special guests include Steve Lee of the Hollywood Sound Museum, diving into the sounds that bring out the fear in Hitch’s best movies!
• Explore how photos and film can help you to interpret and preserve historic buildings and landscapes. • Analyze how master filmmakers used architecture to describe character, establish place and time, and create moods such as suspense and terror. • Discover how pop culture can assist preservationists by transforming the stories we tell about architecture and history.
Christine Madrid French is a published architectural historian and film scholar completing a book titled Alfred Hitchcock and American Architecture: Villain’s Lairs, Skyscrapers, Mansions, and Motels for the University of Virginia Press (2021). She is the Director of Development and Marketing for CPF and an enormous fan of cinema in all its forms. Christine graduated from the University of Utah in historic preservation and the University of Virginia with a Masters in Architectural History and was the former director of the Modernism + Recent Past Program with the National Trust for Historic Preservation.
Steve Lee has worked in film sound as an editor, designer, and archivist for over 30 years - contributing to many films including Apollo 13, Aladdin, The Lion King, The Fifth Element, and A Goofy Movie. He is currently working to create The Hollywood Sound Museum, a destination for fans, students, and professionals. Here, the world will discover the art of creating sound for film, TV, and other media through exhibits and educational programs.

Exposed architectural concrete is often a defining characteristic of modernist structures. Concrete, like other construction materials, eventually deteriorates over time and with exposure to environmental factors. With any historic structure, challenges exist in the development of an appropriately sensitive rehabilitation strategy to address existing distress, including structural repairs, use of compatible materials, development of repair procedures without unnecessary removal of historic material, and sustainable practices, as well as to meet the requirements of governing standards or jurisdictions. It is important to understand the structure's construction, including material constituents of the concrete, unique characteristics, and extent and causes of deterioration, as well as project requirements and goals.

Following a condition assessment, the rehabilitation strategy can be developed, taking into account the sensitive nature of the structure. Appropriateness and compatibility of repairs, together with technical soundness, are key to the success of the repair design. In addition, poor or incomplete repairs will have a minimal service life and can result in additional distress or other problems with the structure.

This session will describe challenges encountered in the preservation of modern concrete structures, focusing on architectural concrete. Case studies of several iconic modernist concrete structures, including the Salk Institute for Biological Studies in La Jolla, California, for which the speaker has developed that highlight approaches to address these challenges.

This program will also be recorded and will be available as part of your purchase of the single event or the full series.

The rapid and dramatic social and technological change at the end of the nineteenth century and throughout the twentieth century had a profound influence on architecture and design, affecting not only the construction methods, appearance, and organization of buildings but also the theories and philosophies.

This discussion will cover topics that shaped the character of the architecture and the values and ideals of the modernist movement which encompassed design, as well as a broader state of consciousness towards the social organization, methods, and means of production, and how the new aesthetics and philosophical approaches impacted creative expression in the arts and architecture. This program will also be recorded. Sign up here for zoom link The discussions will proceed in the context of:

Daniel Abbott, Department Chair Architecture & Engineering, Program Director, Architecture. Daniel serves as full-time faculty and program coordinator for the architecture program at Diablo Valley College, located in Pleasant Hill, California in the San Francisco Bay Area.  Over the past sixteen years, Daniel has taught architecture history, architectural graphics and first and second year design studios.  In the Spring semester he leads the capstone DVC design studio focusing on high-rise design as well as the Spring design-build studio which designs and fabricates projects to compete in the Cal Poly Design Village competition. After graduating from the University of Oregon, Daniel worked briefly with architect Donlyn Lyndon FAIA, before being employed in the offices of Christopher Alexander and later with Daniel Smith and Associates in Berkeley California where he focused on sustainable design. Daniel served as principle investigator for a recent NSF grant in digital modeling and fabrication which brought new curriculum and technology to the architecture program at DVC.  Grant activities included the development of digital fabrication labs and the revitalization of the machine shop at Diablo Valley College.  Other projects included developing curriculum in architecture, manufacturing and industrial design and the creation of design-build projects focusing on parametric modeling and digital fabrication.

Ashley Gardini is an art historian specializing in modern Italian architecture. Her initial research focused on Antonio Sant’Elia and the development of Italian Futurist architecture. That evolved into analyzing the influence of Italian Futurist architecture during both the interwar and post-World War II periods. Now she has expanded her focus to looking beyond the role of Italian Futurism. Her work was presented at the 33rd annual conference of the American Association of Italian Studies. It has since been published in both the 2017 and 2018 editions of the Yearbook of Futurism Studies. Her current active areas of research interests are: In addition to academic research, Ashley Gardini teach both art history and architectural history at community colleges in the San Francisco Bay Area.

The counter-culture of the 1970s birthed a new movement in design and architecture that inspired some of the late 20th century's most iconic architects and engineers. This event, entitled “Saving the Seventies,” intends to present challenges for evaluating cultural resources from that period that are just now coming of age, especially related to unusual and yet historic sites from the counter-cultural movements active at that time. We will explore how to approach alternative sites of recent history that are only recently being evaluated as historic resources, as well as the best way to document and record their significance. This program will also be recorded. Sign up here for zoom link.

Our speakers will come from a variety of backgrounds. Michael Toivonen has been involved in the preservation of Druid Heights, a site now owned by the National Park Service. Druid Heights is located in the hills of Marin county, California west of the town of Mill Valley. UC Berkeley architectural historian, Greg Castillo is an expert in vernacular architecture of the counterculture era (1960s - 70s). Greg curated the 2017 exhibit, "Hippie Modernism: The Struggle For Utopia" (Berkeley Art Museum and Pacific Film Archive) and was the lead author on the exhibition's catalog.

What Is Modernism and How Do We Save It? Alan Hess + Special Guests, June 18

"What is Modernism and How Do We Save It?" Alan Hess + Special Guests Chris Nichols, Mark Davis, and William Kopelk, June 18, 5:30-7 pm, Free and by donation.

Architect and historian Alan Hess has written nineteen books on Modern architecture and urbanism in the mid-twentieth century. His latest book, Frank Lloyd Wright: Natural Design, Organic Architecture was published in October 2012. Hess’ other books include Googie: Ultramodern Roadside Architecture, Forgotten Modern, and The Ranch House. He is currently researching the architecture of Irvine, California, one of the United States’ largest master-planned communities of the 1960s and 1970s. Hess was a National Arts Journalism Program Fellow at Columbia University’s School of Journalism, and received a grant from the Graham Foundation for Advanced Studies in the Fine Arts to research the work of Brazilian landscape architect Roberto Burle Marx. Alan will share stories about his landmark successes and occasional failures in preservation. Bring your questions to the discussion!  This program will also be recorded. 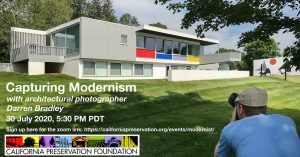