Student scholarships are made possible by generous funding from Liz’s Antique Hardware.

Student scholarships are only available to members of the California Preservation Foundation. If you are not yet a member, use the button above to sign up for a free student membership, then return here to complete the application.

The California Preservation Foundation provides multiple kinds of support for students interested in pursuing a career in historic preservation. Use the tabs below to learn more about scholarship opportunities. Student scholarships are only available to members of the California Preservation Foundation. If you are not yet a member, click here to sign up for a free student membership then return to this page to complete the application.

Looking for a job in preservation? Check out our jobs page here. 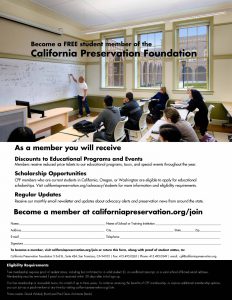 Students enrolled in college, university, trade schools, or full-time professional training programs are eligible to receive a FREE membership to the California Preservation Foundation. This membership provides all the same benefits as our standard membership, including event discounts, regular updates from CPF, and invitations to exclusive members-only events throughout the state. To sign up, or learn about additional membership options, click here.

Free membership requires proof of student status, including but not limited to: a valid student ID, an unofficial transcript, or a valid school affiliated email address. Membership may be terminated if proof is not received within 30 days after initial sign up. This free membership is renewable twice, for a total of up to three years. To continue receiving the benefits of CPF membership, or explore additional membership options, you can join as a paid member at any time by visiting californiapreservation.org/join.

For the third year, the California Preservation Foundation is excited to offer a $1500 Diversity Scholarship, with generous support from Liz’s Antique Hardware. This scholarship is aimed at providing funds to students that come from underrepresented racial and ethnic groups in the field of historic preservation and cultural heritage. Winners will receive a scholarship and the opportunity to be matched with a professional mentor.

This scholarship is open to any student living or studying in California, Oregon, or Washington with professional aspirations in the field of historic preservation. Applicants must either be currently enrolled or enrolling in one of the following types of educational programs:

Applications are now open and will close on November 15, 2021. The award recipient will be selected by December 1 and the funding provided before December 31, 2021. Direct any questions to Jon Haeber.

The California Preservation Foundation is excited to offer a Trades Scholarship, with generous support from Liz’s Antique Hardware. This scholarship is aimed at providing funds to those studying a trade or craft. Winners will receive a scholarship and the opportunity to be matched with a professional mentor. This scholarship is open to any student living or studying in California, Oregon, or Washington with a hands-on professional approach and aspirations in the field of historic preservation. Applicants must either be currently enrolled or enrolling in one of the following types of educational programs:

Students in trade schools and job training programs are strongly encouraged to apply. Applications are now open and will close on April 3, 2022. Direct any questions to Jon Haeber.

Every year the California Preservation Conference includes a session that allows students to present their original research and network with others in their profession. More information about the conference is available here. Scholarship recipients will receive:

Applications for the 2022 conference are due by February 28, 2022. Submit your abstract below, or read more by clicking here.

Tejpaul Singh Bainiwal is a second year Ph.D. student at the University of California Riverside. He studies early Sikh American history and has been doing research on Gadri Babey and Sikhs in America during the early 1900s. Tejpaul is the lead researcher for Stockton Gurdwara and is working with the National Park Service to designate it as a National Historic Landmark. He is also working to nominate the San Joaquin Gurdwara as a County Historic Landmark. Tejpaul serves on the board of Asian Pacific Islander Americans in Historic Preservation (APIAHiP), and his work shows a commitment to actively diversifying the field of historic preservation.

Raised by public school teachers in “The Old Pueblo,” more commonly known as Tucson, AZ, Rafael has been interested in language, heritage, and material culture since childhood. After earning a B.S. in Architecture with a Spanish Language minor from Arizona State University, he worked as an apprentice architect in Phoenix, AZ. Rafael currently works as a scholar-in-residence at the Gamble House and is invested in making history publicly accessible. He is studying towards a career in planning, and is committed to empowering marginalized communities to access the tools to preserve their history.

Growing up in Detroit and studying Sustainable Development as an undergrad at Vanderbilt University, Kelsey Kaline has worked to think creatively about the built environment and it’s impacts, both big and small, on communities. Now a dual Masters student at USC in Urban Planning & Heritage Conservation, Kelsey has adapted this vision to feature the historic fabric of cities. Driven by the desire to make communities more resilient, Kelsey hopes to continue working towards this goal of using heritage conservation as a tool for sustainable preservation and resiliency after graduation.

Mayela Caro is a doctoral student at UC Riverside, with a B.A. and M.A. in history from California State University, San Marcos. Her research field is in 20th century United States cultural history and public history. Mayela focuses on the representation of race, gender, and Latinidad in various forms of popular culture of the mid-20th century. Her Master’s thesis entitled, “Hollywoodisms: Latin American Images in Hollywood Films, 1933-1945,” analyses the manner in which Hollywood represented Latinx actors and how the images that conveyed Latinidadshifted with the implementation of the Censorship Code and the onset of WWII. In spring 2017, Mayela co-curated the exhibit, The Latin Wave, with her advisor, Dr. Cathy Gudis, which opened at the San Gabriel Mission Playhouse. Mayela serves is a member of the Diversity Task Force for the National Council on Public History. In 2016 Mayela was a curatorial intern at the Smithsonian Institution’s National Museum of American History under the program of Latino History and Culture. During the summer of 2017, Mayela was a fellow for the Smithsonian’s Latino Museum Studies Program working at the National Portrait Gallery.