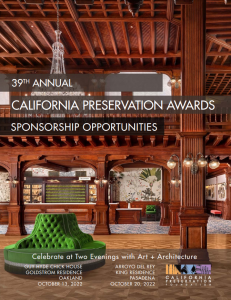 Congratulations to our Winners and
Thank You to our Sponsors!

The California Preservation Awards are a statewide hallmark, showcasing the best in historic preservation. The awards ceremony includes the presentation of the Preservation Design Awards and the President’s Award, bringing together hundreds of people each year to share and celebrate excellence in preservation.

This year, we are celebrating the 18 winning projects, places, and people at six upcoming events including three free educational webinars and an online Awards Presentation. Exclusively for this year, CPF is hosting two “Evenings with Art + Architecture” receptions at exclusive private homes. Tickets are $225 each. Discounts for Award Sponsors and Project Team Affiliates.

Sponsors receive complimentary tickets to the receptions (depending on level), and a 15% discount on additional tickets (limited availability). Click here for Sponsorship Opportunities.

Join us with the project teams to dig deep into the challenges and victories of award-winning projects from 2022. We are holding programs on three consecutive Tuesdays in October – all FREE and open to the public thanks to our generous Design Awards sponsors. Tickets & Registration here.

An Evening with Art + Architecture

Don’t miss this Northern California celebration of the state’s best historic preservation projects. This exclusive event will allow a limited number of 70 guests at the landmark Guy Hyde Chick House in Oakland, designed by architect Bernard Maybeck in 1915. Guests will be allowed to tour the house and homeowner Foster Goldstrom’s avant-garde art collection while enjoying food and drink. 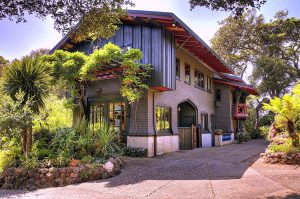 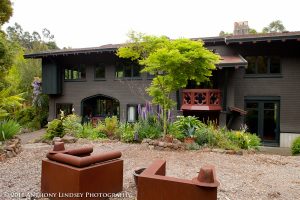 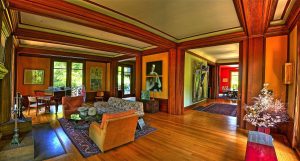 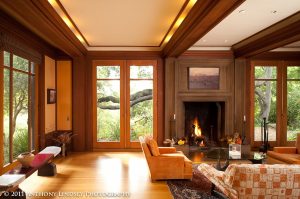 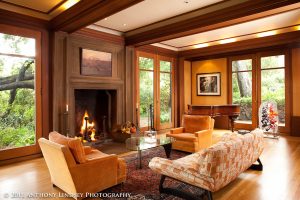 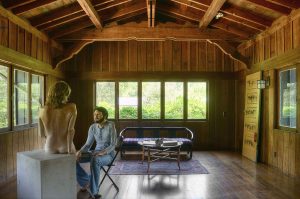 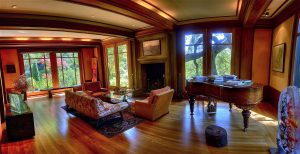 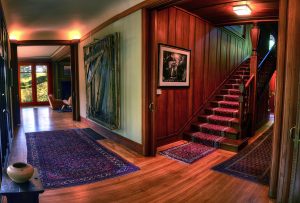 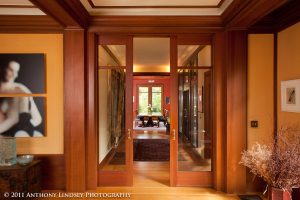 Maybeck, a renowned Berkeley architect, was known for his sophisticated and whimsical approach to design. He created this house for his close friend, Guy Hyde Chick, a civil engineer. The house is a redwood chalet with Japanese trelliswork, quatrefoil balconies and Gothic arches, all worked in a single harmonious design. The 4,500 square foot craftsman home is recognized around the world and has been published in over 25 books and magazines, including the covers of House Beautiful and Preservation magazines. Visitors to the home included chef Julia Child and actor Jeff Bridges. Maybeck is also renowned for his design of the Palace of Fine Arts in San Francisco.

Renowned art collector Foster Goldstrom purchased the house forty years ago. His collection spans 5,000 years of artistic expression. Works on display include pieces by artists Andy Warhol, Gale Wagner, Feng Jin, and John DeAndrea, who specializes in figural hyperrealism, and Arvie Smith, a nationally recognized African American expressionist who depicts the complex history of social and racial injustices. Architectural renderings by Maybeck are on display on the upper floor.

The home is surrounded by an acre of gardens and heritage oaks. “The connection with history, with a great architect and his mastery, with the families who’ve come and gone, with artists and the art collector is nearly overwhelming. Each emotion warrants its own exploration that never seems to satisfy.”  – Blake Gilmore on the Guy Hyde Chick House, The Mercury News

Join our Southern California celebration of the state’s best historic preservation projects one week later. This exclusive event will allow a limited number of 125 guests to enjoy food and drinks outdoors with tours of the house. In 1979, owner Carol Soucek King and her husband Richard sought a home “hidden away in nature,” and commissioned architects Buff & Hensman to design the modern house. This special event will include an upscale taco bar, drinks, and “Golden Girls Cheesecakes” donated by celebrity chef George Geary. Historian Barbara Lamprecht will be honored with the presentation of a President’s Award for Lifetime Achievement. Limited to 125 guests. 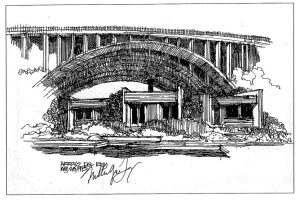 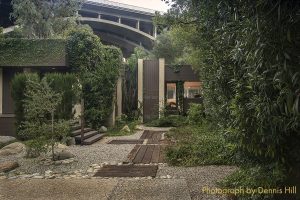 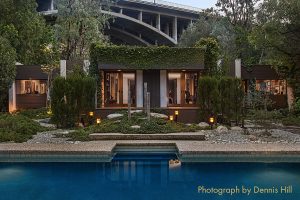 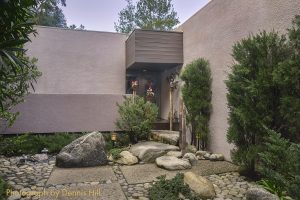 The 1.2-acre property is secluded, natural, and rustic, nestled along the Arroyo Seco River beneath the Pioneers Bridge with landscape design by Howard Oshiyama. The main residence captures the boldness of late-1970s modern, with robust forms, glass, and natural materials. The house features interior furnishings and built-ins designed by the architects, including handcrafted wood pieces by Conrad Buff.

Conrad Buff III and Donald Hensman created their firm in Pasadena in 1952. Both USC-trained architects, the duo worked throughout Southern California for nearly 40 years, contributed to the Case Study House Program, and completed 44 projects in Pasadena. The house is listed as a City of Pasadena historic monument.

Trustee’s Awards
The California Preservation Foundation is pleased to announce the winners of the 2022 Trustees Awards for Excellence: the Rehabilitation of the 1927 Tower Theatre (Los Angeles) and the Historic Assets and Risks Report of the Embarcadero Seawall (San Francisco). These projects were selected by the CPF Board of Trustees for special recognition from among this year’s 17 Preservation Design Award winners. Each project is exceptional in its own right; together they point to the future of preservation, highlighting the ability – and responsibility – of preservationists to address the largest problems facing communities throughout California and across the country. 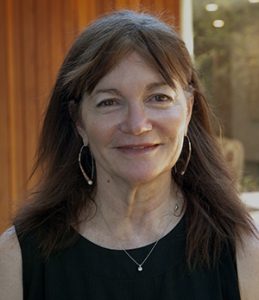 Dr. Barbara Lamprecht. The CPF Board of Trustees is excited to present the President’s Award for Lifetime Achievement to Barbara for her life’s work to interpret, document, and preserve historic buildings throughout California. Her efforts to advance the history of Richard Neutra increased the understanding of his leading role in the Modernist movement, and his enormous impact in the development of California’s built landscapes during the 20th century. Author Alan Hess called her work “among the most thorough and well-reasoned and insightful” in the field. Her mark is seen in cities all across California, including Palm Springs, Long Beach, Los Angeles, and Pasadena.

In her own words, she captures the beauty of the work in historic preservation: “’Best,’ by the way, doesn’t mean the most expensive. It means people expert in skills, good-hearted, resilient, and ethical. Problems are part of the process, and it’s how they are resolved that matters. I love materials, products, procedures … and how fine architecture improves the fluidity of our lives.”

Thank you to our Jury for the 2022 Preservation Design Awards! 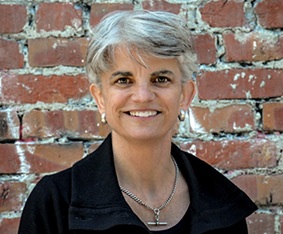 Cathy Garrett, Principal, PGAdesign. Cathy is president of the PGAdesign Landscape Architects a landscape studio based in Oakland celebrating more than 40 years in business. During her career, she has worked on projects that include Frederick Law Olmsted’s Central Park and Prospect Park in New York City, as well as projects in France, Italy, England, Canada and her native Australia. Award winning projects in California include the Lopez Adobe in San Fernando and the Lovelace Garden in Montecito, also Casa Amesti in Monterey, the Allied Arts Guild in Menlo Park and the Leland Stanford Mansion in Sacramento. She has made presentations at annual conferences for the American Institute of Architects, California Council for the Promotion of History, California State Parks, and California Preservation Foundation. Cathy has been welcomed as visiting critic for the University of California, Berkeley schools of Architecture, Landscape Architecture, and Planning, Cornell University, and the University of New South Wales in Australia. From 2017 to 2019, she served as the Consulting Campus Landscape Architect for UC Berkeley. Cathy was a founding co-chair of the Northern California HALS (Historic American Landscape Survey) Group. She is a past-president of the California Preservation Foundation and until 2018 served on the Historic State Capitol Commission. 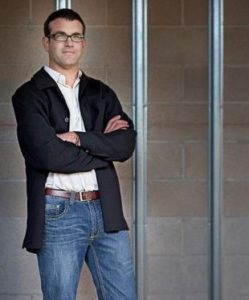 Bill Schaeffer, Partner, Cello & Maudru Construction and CPF Vice President of Development. Bill Schaeffer is a partner at Cello & Maudru Construction Company.  Based in Napa, Cello & Maudru specializes in winery, estate home, & hospitality construction building projects throughout the Bay Area.  With the firm since 1996, he has been lucky enough to work on a few notable historic buildings, most recently the Buena Vista Winery Cellar & Caves (CPF 2013 Preservation Technology Award) & the adaptive reuse of the Mackintosh House in Sonoma for Scribe Winery.  With a focus on history, architecture, and historic preservation, he received a bachelor of science in Environmental Design from UC Davis in 1993.  Bill served on the board of Napa County Landmarks from 2002 to 2007. 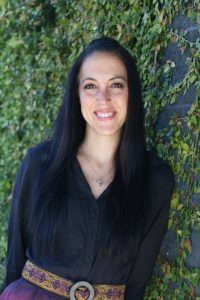 Tarah Beebe, AIA, joined KFA upon graduating from USC and was promoted to Senior Associate in 2018. Her career at KFA has been focused on community-based and hospitality project types, with a specialty in historic renovations and contextual projects. With experience at multiple university and school communities, Tarrah assists stakeholders, staff, and faculty with development of a strong program and a timeless design. She sees collaboration as the cornerstone of successful projects, and enjoys synthesizing input from clients, consultants, and contractors.  Tarrah has led several adaptive reuse projects in historic buildings throughout Los Angeles, including in Downtown LA, a neighborhood where KFA’s leadership earned the CPF Presidents Award in 2018.  Originally from Boston’s historic Charlestown neighborhood, Tarrah’s undergraduate years were divided between the design studios of CUA’s School of Architecture, and the volleyball court as the University’s first libero. She studied urban design in Tanzania as a Fulbright scholar, and has taught at USC in the Building Science program. She has coached a club volleyball team in Santa Monica for 11 years. 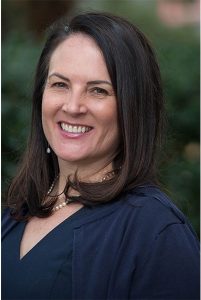 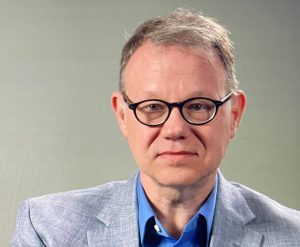 George Smart, CEO and founder of USModernist, created the largest open digital archive of residential mid-century Modernist houses that documents over 15,000 Modernist houses. USModernist’s intrepid team of nonprofit staff and volunteers document nearly every Wright, Lloyd Wright, Neutra, Schindler, Lautner, Breuer, Gropius, Ellwood, Koenig, Ain, and Soriano houses – plus the work of 100 more architects – and the USModernist Library has scanned over 4 million pages of architecture magazines. As host of the long-running podcast USModernist Radio, named by DWELL as the #2 architecture and design podcast, George has informed, entertained, and inspired audiences with over 260 shows to engage preservationists. George and USModernist have won 17 honors for leadership in preservation, including a 2014 DOCOMOMO-US award, a 2022 national Honorary AIA and 2016 national AIA Institute Honors for Collaborative and Professional Achievement. 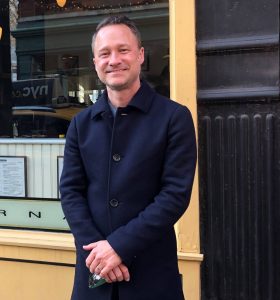 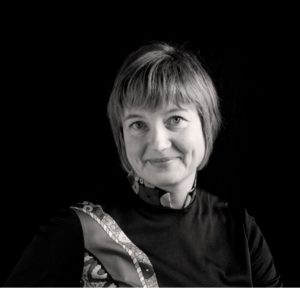 Sian Winship is President of the Society of Architectural Historians/Southern California Chapter (SAH/SCC). She works as an independent preservation consultant and has authored a number of historic contexts including the award-winning Japanese American Context and Women’s Rights Context for SurveyLA as well as nominations for architectural and cultural resources at the local, state and national level. She recently attained National Register designation for the Woman’s Club of Bakersfield. She was a contributing author to the book, William Krisel’s Palm Springs and received a Friends of Residential Treasures Fellowship in 2020. Through the SAH/SCC, Sian has curated and led architectural tours throughout Southern California, as well as Boston, Sarasota, Phoenix, and Pittsburgh.

The California Preservation Design Awards is an annual event that recognizes innovators from across the state in architecture, engineering, planning, documentation, and design.

Our Sponsors are invited to join us for our first-ever celebratory series of events held both onsite and online. Thanks to our generous patrons and sponsors, we will have two Evenings with Art + Architecture (scheduled for October 13th in Oakland and October 20th in Pasadena), three educational webinars free for the public, and an online Awards Show and Ceremony (scheduled for October 27th, also free to attend).

Why Sponsor? This year is unique in all sorts of ways. Our on-site receptions will provide you with an opportunity to meet dozens of business leaders, explore new perspectives, and build your future with like-minded colleagues. Sponsors receive a range of benefits, including early access to event tickets, with extended reach to more than 20,000 people across the country and around the globe.

See the details in our Preservation Design Awards brochure (download PDF) or sign up online on our Sponsors page. Please contact us for other opportunities at cpf@californiapreservation.org. 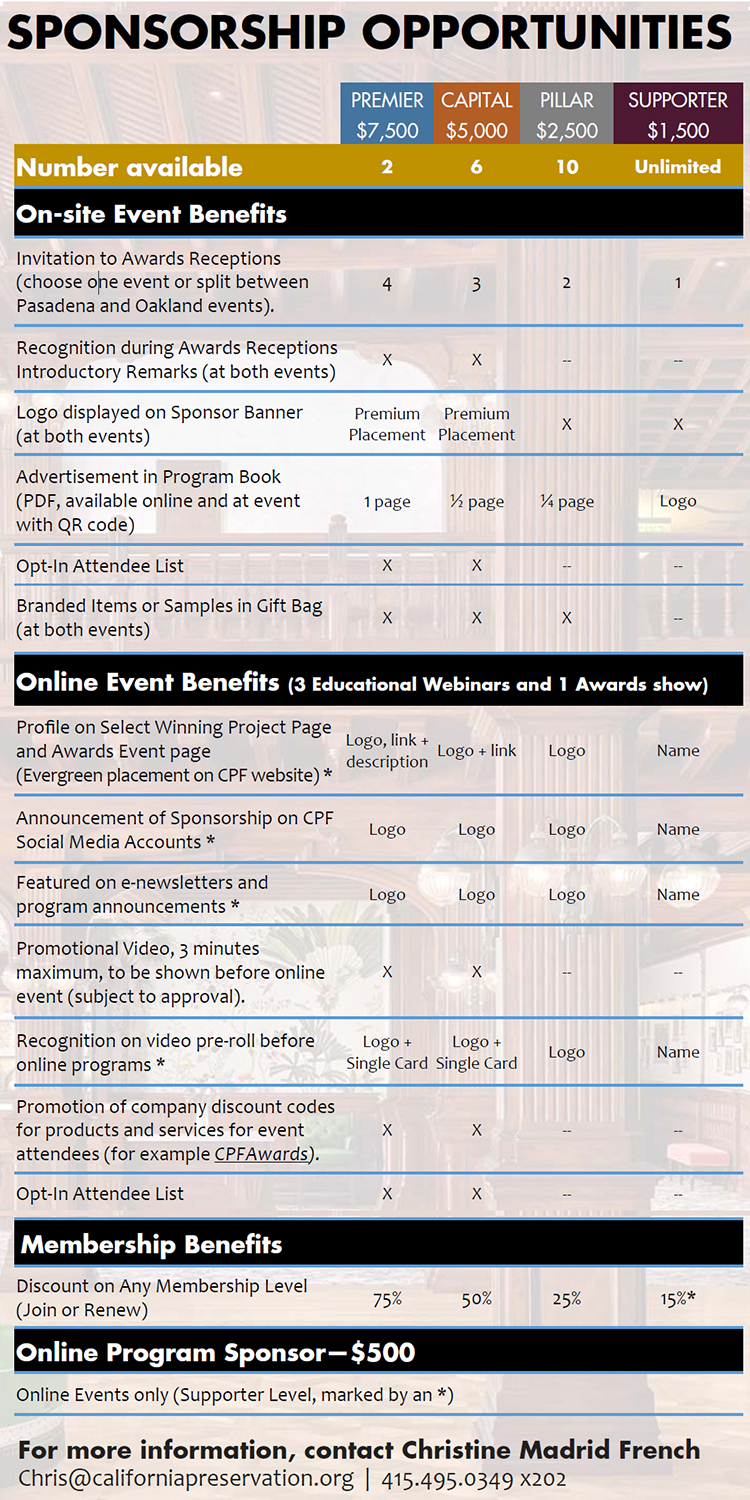 Press releases are available in below

About the Preservation Design Awards

Since 1983, nearly 600 projects have been recognized with a Preservation Design Award. Winning projects are selected by a jury of top professionals in the fields of architecture, engineering, planning, and history, as well as renowned architecture critics and journalists. The jury selects projects that have furthered, to a notable degree, the purposes of the profession, consistent with the California Preservation Foundation’s mission.

About the President’s Awards

President’s Awards honor people deserving of special recognition for their outstanding preservation efforts. Since its inception in 1991, this program has recognized more than 155 individuals and organizations whose work allows others to gain a deeper appreciation of historic resources and their value to California’s economy, environment and quality of life. All proceeds from this event support the California Preservation Foundation’s statewide education and advocacy programs.