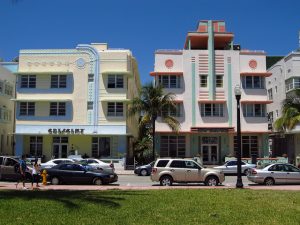 The Miami Design Preservation League, founded in 1976, faced an uphill battle to save the modest buildings  of Miami’s south end (on land once used for coconut farming) because they were not only different from the elaborate luxury hotels and sprawling mansions developed further north, they were less than fifty years old and were not associated with significant events or persons. The 1930s Art Deco style buildings were also considered by many as garish. Despite these odds, the League was successful in getting the South Beach district on the National Register in 1979.  It was the first 20th century Historic District in the nation and protected the largest concentration of Art Deco buildings in the world. By the 1980s, television shows like Miami Vice and photo shoots done by renowned fashion photographers such as Bruce Weber made the Art Deco District one of the most famous neighborhoods in the United States. Even Andy Warhol requested a tour.

As more attention and wealth came to South Beach, so did the desire to demolish the pre-1942 single-family homes and replace them with more elaborate ones. The League continued to advocate for historic buildings of South Beach by encouraging local designations in the National Register District as more and more demolition permits were being filed. In 1982, Miami Beach enacted its first local historic preservation ordinance, containing 100 percent owner consent provision (revised to only 51 percent in 1983). In 1992 the City Commission expanded the Historic District to the entire mile-square Art Deco district in South Beach and thus protected from demolition the full area entered into the National Register of Historic Places back in 1979. Still, many important resources remained undesignated and unprotected, leaving the door wide open for what happened next.

The League has seen both lost and won battles to save historic properties in Miami, setting important precedents for preservation policy along the way. In 2013, there was a more rigorous campaign to save South Beach’s historic properties from demolition when one of Miami’s notable homes, built in 1925 by Walter DeGarmo who was a prominent Miami architect at the time, was purchased by Dr. Hochstein. After consulting with contractors and architects on the ability to salvage the badly dilapidated home, Dr. Hochstein submitted plans to raze it and build a new one three times its size – a growing trend for the growing wealthy population in Miami. Designation of private residences is usually initiated by owners, but in this case a member of the Miami Design Preservation League immediately filed a request to designate the house located at 42 Star Island Drive as historic in order to protect it from the new owner’s plans to demolish it.

The City of Shibam: Conservation Beyond “Preservation”
The Politics of Preservation: Who Decides the Relevancy of Resources?