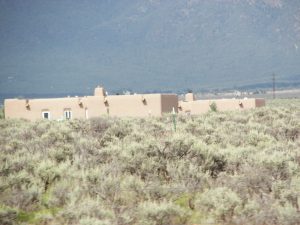 Shortly after New Mexico became the 47th state, Santa Fe residents, city officials, architects, and artists, all agreed to promote a uniform style that would not only link the city with a romantic architectural image, but also through tourism, boost an economy that had slowly been in decline since the closing of the Santa Fe trail. By the 1920s, a uniformly distinct and exotic style known as “Santa Fe” emerged. It was based on local architecture found in the Indian Pueblos and Spanish Missions, and replicated the adobe architecture encased in lime plaster and stucco just a decade before. Respected architects such as John Gaw Meem, also a popular preservation advocate, and one of the founders of the Historic Santa Fe Foundation, helped spearhead the “Santa Fe” style and New Mexico’s first preservation ordinance in 1957. The ordinance prohibited the construction of buildings not built in Spanish-Pueblo, Territorial, or the subsequent Revival styles within the city’s historic districts, reversing the Americanization of its past, at least in architectural form.

I don’t think Mr. Meem realized at the time that this uniform building style would do more than just preserve the best of Santa Fe. The “Santa Fe” style has taken the city farther away from its historic roots and created faux-adobe structures. Structures framed with wood or metal, boasted adobe-like colors and features such as flat roofs, rounded corners, and projecting roof beams (vigas). Authentic adobe techniques that assemble sun-dried mud blocks by hand and require frequent re-applications of mud plaster became too time consuming and thus too costly to use in new construction and many renovations. Manufactured adobe bricks (mud mixed with concrete additives) and variations of cement mortar mixes were used instead. These new and improved adobe-like structures continue to give the city a general uniformity that is prized and what people come to expect. I certainly expected it upon my arrival. Looking out onto the Santa Fe landscape you barely notice the population of almost 70,000 thanks to this uniformity in style, color and texture. 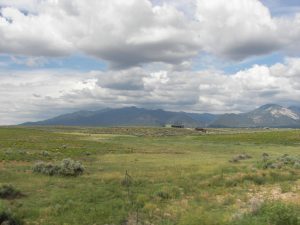 From a Recognizable Style to Quasi-historic Destination

One of the reasons that Santa Fe is the most popular tourist destination in New Mexico is because of this style and uniformity, and because it gives tourists a simpler, digestible version of its complex past. But like many cities across the U.S. who have capitalized on their historic resources, Santa Fe rehabs beyond what is necessary by fitting things into a popular or current historic environment for the sole purpose of attracting tourists. Like other tourist-oriented cities, it is so single-mindedly pre-occupied with the aesthetics of building styles and surfaces that it has forgotten that preservation is about saving history so that others will connect to it – the pleasant, the unpopular, and the architecturally divergent. Adobe structures like the Chapel of San Miguel, considered one of the oldest churches in the country (1610 c and reconstructed in 1710 ), is now perhaps more popular than the Plaza with its etched-out narratives and its fanfare of cuisine and Puebloan wares. In 2012 a group led by Cornerstones Community Partnerships, removed tons of Portland cement from the exterior of the church and re-mudded its original adobe structure. San Miguel and other authentic buildings like it not only suggest a rich history but are true to it – in architectural form and interpretation.