How “True” is New Mexico True: Popular Visions of New Mexico’s Past Part I 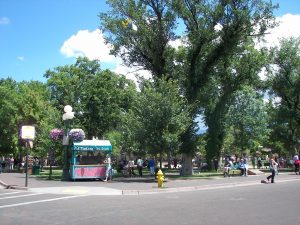 The following opinion is based on observations during a two-month summer stay in Santa Fe, New Mexico as a trades intern with the Historic Santa Fe Foundation. The observations were made while restoring historic features and performing curatorial maintenance on multiple properties owned by the HSFF, attending meetings and lectures on how New Mexico manages its historic environment, and while exploring just why this city is so different –  what makes it a part of “true” New Mexico.

My first observation was of the Downtown and Eastside Historic District (one of five historic districts in Santa Fe). I saw a place that was rich in history, tourism, and good times, but reflected more of the city’s present needs and values than a realistic interpretation of its history. New Mexico residents boast of Santa Fe’s tri-cultural heritage of Indian (Pueblo), Spanish, and Anglo – even though its pioneering settlers were more multicultural, which included Japanese and African-Americans, among others.

Overall, I found the city of Santa Fe guilty of not only “façadomy” (preservation efforts that have taken more care to give the appearance of history by preserving only the façade of historic structures than to actually engage in preserving the history of the building), but of “interpretive bias” (presenting a history void of conflict, sanitized, full of romantic and socially acceptable ideas). It seems that “history is an obstacle to be surmounted” here in Santa Fe. In the bustling Plaza, the geographic and cultural center of the city, a former fort, and the end of three main early trade routes, stands an Indian war memorial with the original inscription “Savage Indians” carved out, leaving only the word “Indian.” It was removed when peace was established between the Natives and the early settlers, just one example of how historical social conflicts have been muted.

Beginnings of a Universal Style

Santa Fe, New Mexico is the oldest capitol city in the United States and has one of the oldest residential neighborhoods, Barrio de Analco, of European origin. It was settled in 1620 by the Spanish. Only a few buildings  in the Barrio district reflect how the working-class Spanish colonist, Tlascalan Indians, and other Indians lived in Santa Fe during the early 17th and 18th centuries, or from the pre-colonization era, remain. I have noticed that visitors are more enamored with the authenticity of the old adobe buildings than they are with the overall picturesque uniformity. I am as well. The James L. Johnson home – also known as El Zaguan , one of the properties owned and cared for by the Foundation and where I reside for the summer, is a tapestry of the early 1800s (pre-Johnson ownership) Spanish-Pueblo style, as well as the Territorial style which became prevalent in the late 1840s.

The Territorial style was developed as new types of materials and methods were brought into the area via the Santa Fe Trail, westward expansion, and finally trains. Adobe structures were encased in stucco and lime plaster, and the exterior walls were capped with fired brick, initially to help prevent erosion. Home-made wooden door and window frames were replaced by milled ones and fixed glass was added. These additions/conversions can be detected among the exposed historic façades of El Zaguan – converted into apartments by Margretta Dietrich in 1928. Throughout the rest of the city, historic features as old as 400 years are successfully hidden beneath stucco, lime plaster, and concrete.

In 1912, tourism and statehood prompted a desire to mandate an architectural style that could represent the state. Prominent city members, artists and architects like Hamilton Rapp (designer of the Museum of New Mexico inspired by the San Esteban Mission, Acoma Pueblo), introduced the “Santa Fe” style that had been brewing since the close of the Santa Fe Trail. So far the city’s style remains in that trajectory, for good and for worst. My opinions on that can be found in the next blog.