Atascadero Printery – Treasured in the Past, Invaluable for the Future

Throughout millennia communities and cultures around the world have maintained, renewed and unearthed historic structures, recreating them in form and fashion to support the ongoing needs of the current population. In most instances, these structures retain a portion of their original purpose, redefining their objective to fit current times.

The Atascadero Printery, a 100 year old structure along California’s Central Coast, now listed in the National Register of Historic Places, stood vacant and vandalized when the Atascadero Printery Foundation, a 501(c)3 organization, formed out of an online community discussion about the building and its historic role in the development of the City, and a vital purpose for its future.

E.G. Lewis, a magazine publisher from the east, founded Atascadero in 1913, his second utopian colony, the intended home for the American Women’s Republic. Lewis’ objective was not only a completely self-sustaining colony, he based the whole community on advancing women’s rights, with all property initially in the name of the American Women’s Republic. Lewis’ advanced thinking, and some say scheming, garnered enemies over time, along with significant debt. 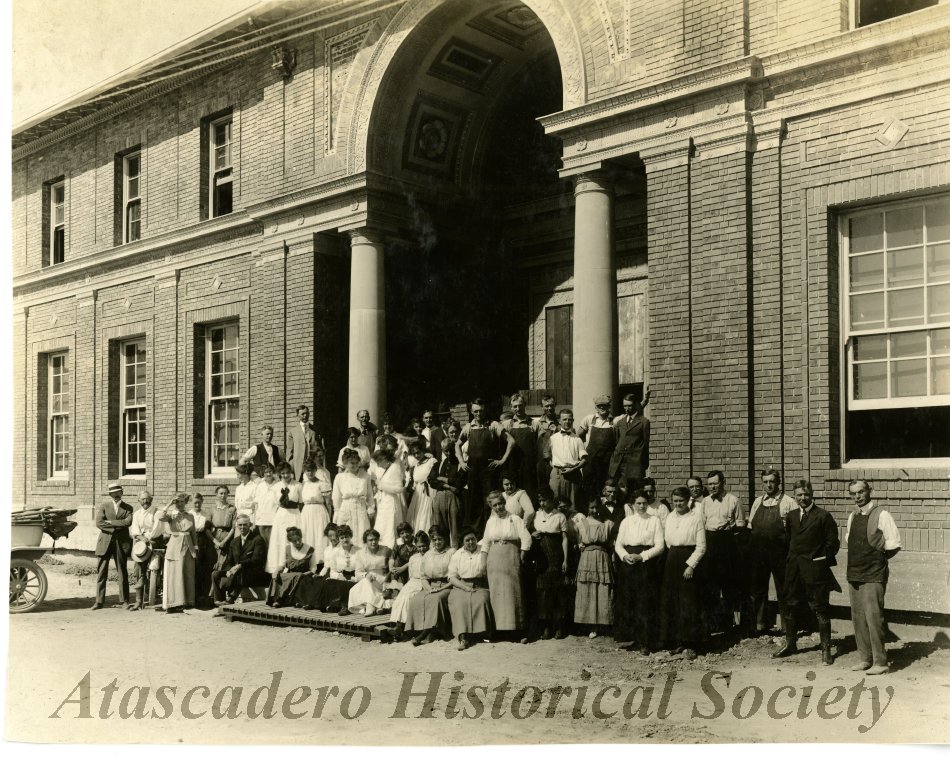 The Printery, completed in 1915, was the first civic building in Atascadero and held the first rotogravure presses west of Chicago. Surprisingly, the Printery, as the largest printing operation west of the Mississippi, was in the fledgling community of Atascadero, away from major cities of the time. Lewis first published the Atascadero News in 1916 with an initial printing of 100,000 copies. He also printed the Illustrated Review, a photo/news magazine, as well as sections of the Los Angeles Times, San Francisco Chronicle and Sunset Magazine.

Lewis was heavily influenced by the City Beautiful Movement, with the intent of introducing beautification and monumental grandeur in US cities, creating a harmonious social order to enhance the quality of life. His vision for the Atascadero Civic Center included an Opera House, providing a site for the arts. Lewis commissioned artist Ralph Holmes to paint the murals on the entry to the Printery and utilized Italian Carrara marble panels in the huge arched entry.  Some of these distinct touches have been preserved, while others were either destroyed or vandalized.

In 1925 the Atascadero News was sold when Lewis was forced into involuntary receivership by a group of his creditors. Although his debt was reportedly in the low seven figures, his creditors recouped $8,000. The large presses were moved to Oakland in the mid 1920’s and the newspaper was published in a smaller building on the Printery property into the 1960’s.

Baseball Hall of Famer, Jackie Robinson, worked at Cal Poly’s satellite campus, Camp Atascadero, as Athletic Director in the spring of 1941 when the Federal Government leased the Printery and the Civic Administration Buildings for the National Youth Administration, working with youth from 16 – 18 years of age. In addition to organizing activities for the youth, Robinson also played on the camp’s baseball team.

The Printery building served as a Junior College and prep school and was purchased in 1950 by the Masonic Temple Association. The structure has also housed the Atascadero School District Offices, a substation for the San Luis Obispo Sheriff’s Department, along with a photography and karate studio. The Association donated the Printery building to the City of Atascadero in 1994, and due partially to a lack of funding, the City returned the building in 2004.

The structure subsequently fell into the hands of a failed developer, becoming a blight on the downtown area, next to two community schools, and was facing a tax deed auction. In 2017 the Atascadero Printery Foundation won a nail-biting round of bidding against another party in the tax auction, claiming the 19,000 square foot building on over an acre of land for $300,000. 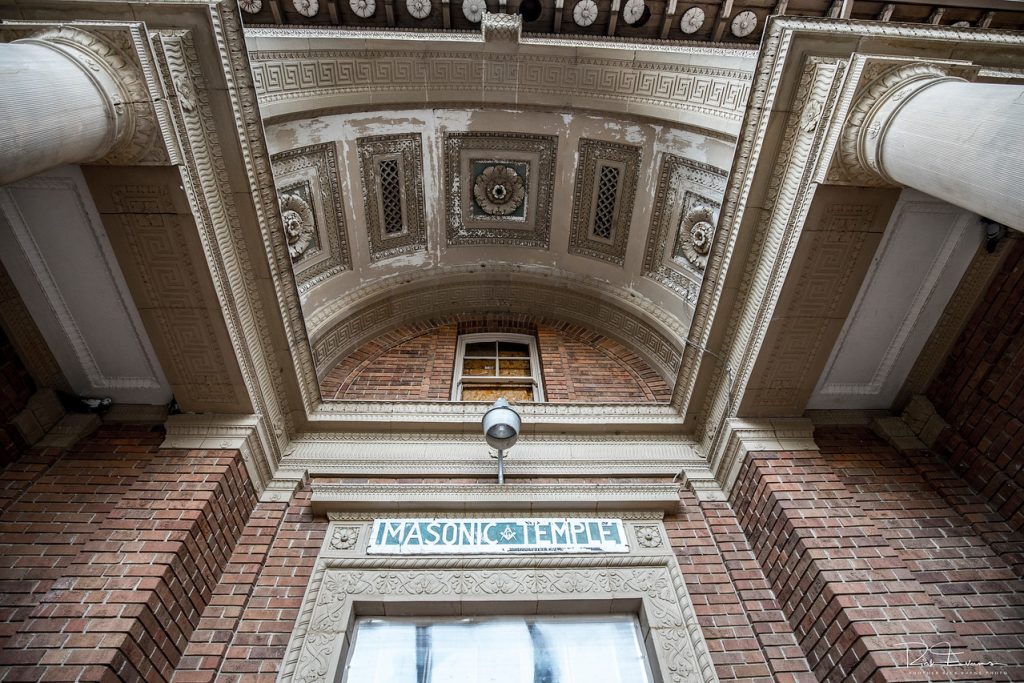 With the fate of the historic site finally secure, the Foundation began the daunting task to reclaim, rehabilitate, and repurpose the building and grounds. The 2003 San Simeon Earthquake left the unreinforced masonry building badly damaged, making the Foundation’s first task to stabilize the structure by installing temporary shoring to prevent the east and west walls shearing from the building.

This past summer, with the help of many skilled volunteers, seismic shoring was installed in the former converted swimming pool room of the Printery building. This room originally housed the large rotogravure presses that printed publications going to millions of readers from 1916 through 1924. The shoring work was completed at a cost of less than $8000 in materials. 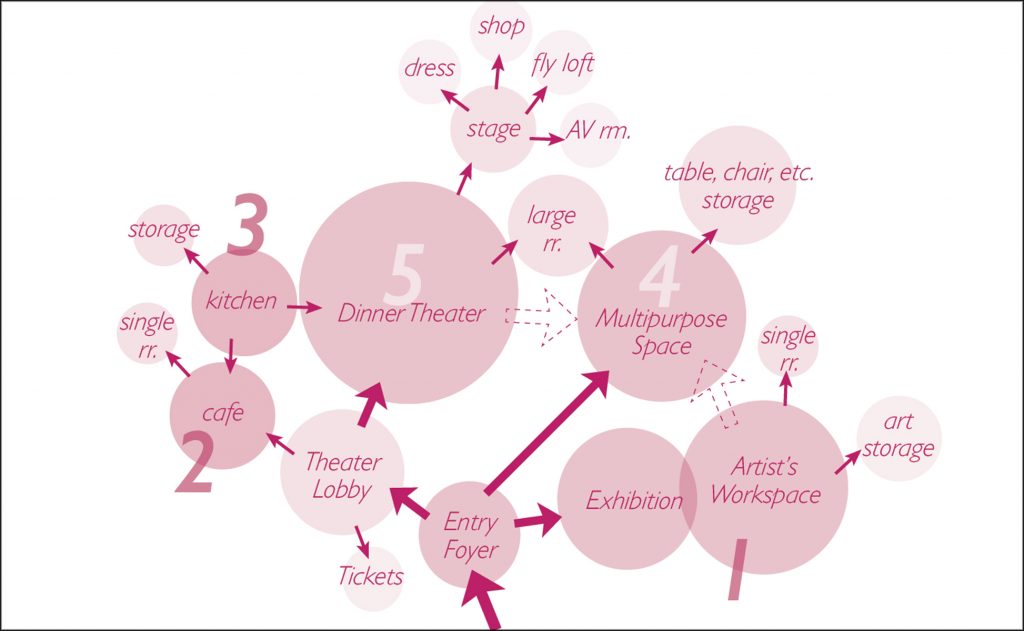 The next phase of seismic shoring will place even taller wood columns in the old gymnasium space, with estimated costs under $10,000 in materials. Once complete, the stabilization will enable the demolition of the damaged non-historic karate studio addition from the 1970’s. If left in place, this addition could cause further damage to the building’s structure by pulling down the historic walls as the studio itself crumbles.

The Atascadero Printery Foundation has reclaimed the structure, with the task to rehabilitate well underway. The Foundation has developed a fundraising strategy to support those efforts. Foundation president, Karen McNamara, is asked almost every day, “How is it going? When will it be done?” She replies, “It will be done when funds allow.” McNamara believes completion could be within a two-year period if funds existed today.

The Atascadero Printery Foundation is seeking funds to continue the rehabilitation of the site, with multiple opportunities to donate. Click here to read more.

Once the mortgage is satisfied, the Foundation will apply for grants and other funding mechanisms that require their funds not go towards capital expenditures. The Atascadero Printery Foundation participates at every community event, creating a presence and spreading the vision of what the repurposed Printery will provide the community in the future.

Together with Atascadero Performing Arts Center Committee, the Atascadero Printery Foundation has the opportunity to fulfill E.G Lewis’ vision for the City and community, creating a site for the arts, relational programs for all ages, affordable space for community groups, a draw to the community, including local businesses, and the opportunity to touch every life, especially those most in need of support, such as youth and seniors.

The possibilities of the Printery, serving as a common venue for the arts, fostering involvement and offering the ability for creativity and expression in the community is an exciting and fulfilling vision, becoming a clearer reality each day.

Nona Grancell lives in Atascadero, California with her husband, Norin, and cat, Alice. Nona enjoys fishing, traveling, sculpting in clay, writing and activities involving her eight grandchildren. She is completing the final touches on the first phase of her memoirs, "Knowing When," which she anticipates publishing in the near future. Nona has published in “Twenty-Minute Stories and Poems” Volumes l and ll.

View all posts by Nona Grancell