On February 21, Senate President pro Tempore Toni G. Atkins introduced SB 451, a bill to create a state historic tax credit. The legislation builds on work we did in 2014, with the collaboration of the American Institute of Architects, California Council (AIACC), to promote tax credits. We are working again with the AIACC to pass SB 451 in 2019.

Historic Preservation Tax Incentives programs are an effective and proven means of leveraging private investment in the adaptive reuse and preservation of historic buildings. Under SB 451, $50 million will be allocated annually for tax credits from January 1, 2021 to January 1, 2026. The tax credit is worth 20 percent of qualified rehabilitation expenses, with a 25 percent credit for certain types of adaptive reuse, including affordable housing. Some of the tax credit allocations will be earmarked for smaller projects and the bill would also establish a tax credit for qualified rehabilitation expenditures for a qualified residence.

According to a report released last year, the Federal Historic Preservation Tax Incentives Program added more than $6 billion in GDP, contributing more than $12 billion in total in output. Across the political spectrum, there is broad agreement that Historic Tax Credits are an essential way to promote smart investments. Last month, Bill Frist (former Republican Senator Majority Leader) wrote in Forbes that historic tax credits are a proven method to “preserve and celebrate our past, while also meeting our communities’ needs for economic investment and job creation.” Nearly 40 years ago, then President Ronald Reagan argued in favor of making the federal Historic Tax Credits permanent, a program that has now “facilitated the rehabilitation of over 42,000 certified historic buildings and attracted more than $85 billion in new private capital to the historic cores of cities and towns across the nation.” The bill introduced last would California the 36th state to offer a state historic tax credits, building on and expanding the federal program.

The California Preservation Foundation is a sponsor of this crucial legislation. Look for more information in our newsletters and advocacy bulletins. We need the support of all members to secure passage of SB 451. Your donation to the Advocacy Fund will be matched (up to $50,000) and will help us secure the passage of this important bill. 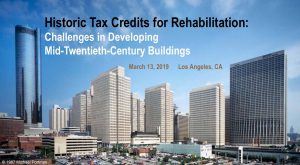 Join developers, building owners, investors, consultants, and others for an intensive one-day conference at the historic
Los Angeles Athletic Club on March 13, 2019.

Mid-century buildings represent a vast opportunity and market advantage for well-informed practitioners. In a series of presentations and panel discussions learn: